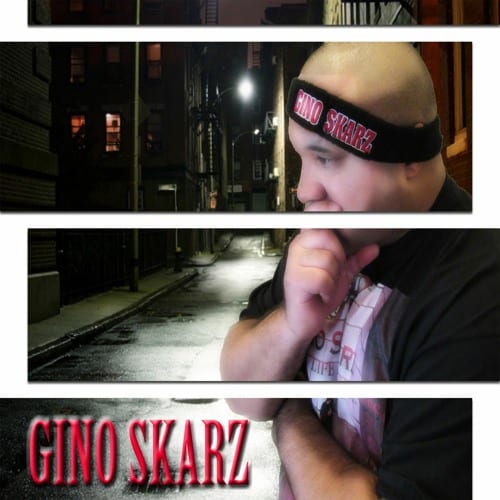 Where are you based out of? Also, how did you get you emcee name?

I reside on the outskirts of San Diego and frequent LA because of family living there too. So I do hang out there at times like it’s home with the family. Gino Skarz is a name I drafted about 16 years ago, and the meaning behind it correlates with the fact that “scars make us who we are”; they tend to define us physically, spiritually, and mentally. Gino is a family nickname since my childhood; as previous artistry names were (in order of precedence), Stratagy, Venom, and the silliest of all, JJ-Ski (and I don’t even like to ski).

Let’s get right into it, your latest album “Skarz Are Beautiful.”, give us the background story behind the project.

The whole, holistic purpose of the entire album was to tap more into my pain and struggles with life itself, and also share my thoughts and experiences from the past to the present. Yeah, I’m a grown man and what not, I handle my business and so on. However, even as responsible adults, we all still have to deal with tribulations of all sorts while living in a modern society that tends to destroy people rather then build them up to be productive, disciplined, and self-sustaining. Which is why there is a lack of support for anyone who practices individualism and self-knowledge (Knowledge of self); because society wants conformity like a herd of sheep and followers in every way possible (backside of album cover has a grey wolf). I’m not stating that people need to be straight greedy, selfish, immoral, corrupt, or anarchist, or anything like that; but why can’t you just be accepted for being who you are and not what you have to pretend to be so long as your actions aren’t damaging or negative towards people? Thus, you have people suffering from depression, loneliness, and other forms of mental health that have become addicted to social media outlets. It’s become a way for people to share a part of themselves with the world that other people may not recognize or wan’t to understand because their own reality makes them unhappy. People are really good at pretending to be happy with so much foulness going on in society because they can’t relate to what’s real, or don’t want to. Scars are beautiful inside and out, because they show the world what you have been through, and there is no easy breezy road to real fulfilling happiness. Science states that happiness is a choice, but for many people it seems to be something that is earned through hard effort and after fighting through some inner pain (if you’ve ever had to struggle with life’s trials and trauma). At some point, individuals who are suffering alone will need to find inner peace and awareness; as I’m just trying to paint a real picture of compassion, empathy, and forgiveness for people that choose to listen.

Let us know how your style if different than all the rap artists out there!

Honestly, I really don’t find myself to be unique or special in regards to style or delivery, but I do think that I strive to be as artistic, authentic, professional, and organic as I can possibly be. I am well aware of ghostwriters and the many tricks the music industry possesses, too include the artist comparison’s that tend to plague us up-and-coming artist and seasoned underground folks. Meaning, that I write my own material and produce for myself, so with that, I consider myself to be just as talented as much as the next person; whether major, minor, or independent. If I need to differentiate who I am as an artist from the other’s out there in the world, it would be that my personal and professional life experiences would definitely not be anywhere similar to most of them.

These are the two questions of the year fam. For starters, I need an idea or a topic that really gets me to brainstorm and focus on, so long as it is relatable and isn’t too science fictional or unreal. Most days or nights lyrics or bars will just pop into my head and I record them on a recorder device for possible later use; and whenever in the studio, the track has to ‘speak’ to me in a sense. Meaning, that the beat, melody, bass, and so on, will determine my approach to the record; because for me, it all has to make sense for it to come together. I can go hard on pretty much any track I hear, but the bars may not suit the record; so I have to be really picky about my sounds and what I’m trying to convey in the bars, hooks, ad-libs, and bridges. I actually have my own ‘formula’ when producing records, and it just may be similar to how other artist work; but I do tend to follow a protocol when it comes to making a record, and my mood, feelings, and emotions will only heighten its existence.

How are you coping with this whole Covid 19 situation? Has it delayed any new music production by any chance?

The pandemic definitely has me always worried about my loved-ones and other family members health, but mostly those close to me because I gotta still be careful for my own survivorship and theirs. All we can really do is practice good old hygiene habits and use that protective gear when necessary; and it wouldn’t hurt to give each other room to breathe regarding other humans in close spaces. I don’t want 6 feet distance, no, I want 50 feet fam; because we all only got one life, one quarter to play this game, and you gotta cherish that by being smarter on how you live. Not everyone will get infected, but you damn sure don’t want to be on that list is all I’m saying. As far as music producing, writing, time in the studio, and shooting videos? Covid hasn’t impacted my creativity at all thank God. I’m still blessed and able enough to do whatever it is I set out to do. I’m already working on a new album for next year, so more to follow on that.

We have to ask, with all this social discourse and revolt, protesting and rioting, exposed police brutality toward blacks,BLM movement, how do you feel about this? We would love your perspective on the climate we are living in right now?

Man, the country has really gone backwards with everything that has recently occured; and it seems as if there is a struggle for power and separatism rather than unification between the government and its citizens. Since the birth of this nation, people never really treated each other as equals, as those in power or those with certain privileges based on classism had to tolerate and accept those who were considered to be ‘less than’ or of lower classes due to changes in the laws of the land. People born into power or privilege have better opportunities than those born into working-class, lower-class, or impoverished family situations; so those with ‘less’ are viewed as societies problem children. If you are from a working-class family you still aren’t viewed as an equal to someone who is of a wealthier class, but you still have a better shot at life then someone impoverished. Where our society falls apart and breaks down is when we separate the different classes of people through law enforcement and undercover racism; in which causes more of a disadvantage to someone who doesn’t have much of a support system to rely on economically, socially, and even spiritually. We as a nation are overly opinionated of others who appear different than themselves (those in power), which leads to discrimination; that alone will enrage people and make them feel worthless to society. So they fight, they riot, they destroy places, properties, and things that don’t even belong to them; all because someone wealthier and more powerful makes them feel inferior and unwanted in their own country by birthright. Police departments are an institution just like any other, say the military, or department of corrections (in which the nation has the highest incarceration rates globally); and anyone of minority descent or of immigrant status will face some disadvantages because of who they are and what they represent; which is someone considered ‘less-than’ in the eyes of the supremacist. This country was built on free labor due to the slave trade, and if you are a struggling immigrant from another country, you are treated as if you have nothing to offer until proven otherwise. I believe people start movements and protest because they want their ideals heard and seen by the public and all levels of government; they want to be acknowledged as people of importance that stand for something significant. They want to make changes in the way we live in some way or form, and become aggravated whenever the government or its politicians don’t take them serious enough. Yeah, we have black, hispanic, indian, and asian cops, or other minority officials in power; but they have to follow protocols that most supremacist don’t have to follow, or they will be back in the streets like the rest of us. Let’s just build a big ass ark and move those who want to leave America back to the motherland (Africa); or even Europe; but not without their reparations first, because this country will never change, not without self-destructing first.

I would have to say that it would be very authentic and systemically organic; meaning that it is created by artist that want to stay in tune with traditional hip-hop and rap roots, and are not going the payola method in order to build their fanbase just to fit in with the mainstream. When you are creating something from the ground up and from scratch, with little to nothing, limited resources and support, and the end result is something that the art itself can accept and appreciate; you are authentic. Being independent means exactly what it means, because it’s like getting kicked out of the house at 18 and then you go build one just to show your folks “I got this, I can do this”. With regards to being ‘organic’, I’m just stating that you are not a bi-product of someone else’s efforts or creativity; you did it on your own with minimal support and kept it original (whether you sample some shit or not, because hip-hop and rap roots coincide with sampling). You created this monster, and it’s yours to control.

To anyone who has ever streamed, downloaded, watched my videos, or bought a record, shared or liked my content on a social media platform, I have to give a sincere thank you. I do this music thing for the love and passion I have for it, but you all make the creativity of it more worthwhile. Lastly, and just as significant, shout out to my wife and daughter for their support, management, and time for putting up with my BS in order to put the work in. Without them, it would have made the struggle even more harder. IndieHipHop, thank you for this opportunity and interview as well. Peace and nappy afro hair grease!